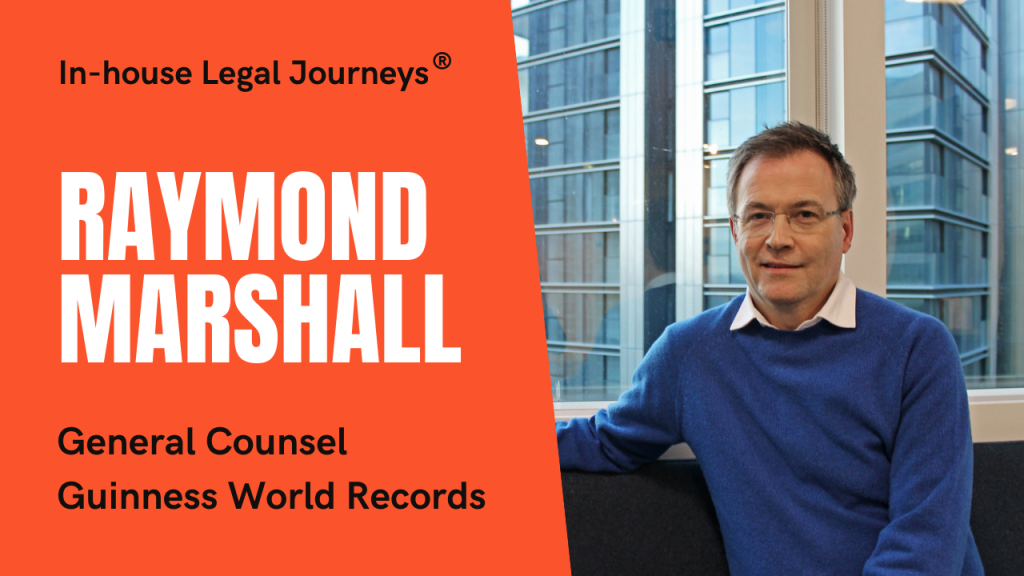 Guinness World Records (GWR) General Counsel, Raymond Marshall talks to us about how he became a lawyer, some of the highlights of being the guardian of the well-loved brand which is now seeking to hire a Senior Legal Manager through Florit Legal.

How did you come to be a lawyer Raymond?

Before becoming GWR General Counsel, I wouldn’t say I fell into the law, but I’ve certainly taken a road less travelled.

My personal interests have always been arts-related – my first two degrees being Art and Film History. It wasn’t until my second job in the BBC (1996, Commercial Rights) where my interest in all things rights-related – and copyright in particular – began, and where I consider my career in the law to have started. However, although having amassed much practical legal experience in the intervening years, it wasn’t until arriving at Guinness World Records in 2008 where I began to pursue a formal legal qualification.

In many ways therefore I’ve done my career back to front; firstly, gaining practical experience, then undertaking the formalities of qualification. I’ve never had a grand career plan, and If I had my time again, I’m not sure I’d do things differently.

What factors made you choose to work at GWR?

The opportunity to be a guardian of a well-loved brand, one that I was very familiar with as a youth (GWR had also published British Hit Singles, and I used to spend hours poring over chart positions).

A few months into the role, I was asked to adjudicate several football skills records in Turin as part of a SONY campaign for its new BRAVIA television. Kaka, who was playing for A.C. Milan at the time, was also part of the event. At that point, I realised this was going to be unlike any other job, legal or otherwise.

What’s good about working there, and what’s a typical week like for the legal department?

A typical week can guarantee some very unusual queries. We are often asked to advise on a record application or attempt which has no precedent or give our opinion on the associated risks of granting a trademark licence to a best-in-class product or service.

We expend a lot of effort on brand protection. As GWR brings a certain status to individuals and companies, those that are tempted to use our trademarks without a licence ensure a steady source of infringement action.

Record-breaking can be a contentious business, so there is always some meaty matter to tackle in some far-flung jurisdiction.

How has the company changed in the time you’ve worked there?

Twelve years ago, the company was still very heavily reliant on its publishing business. Since then, we’ve worked very hard to diversify, developing other revenue streams such as our records consultancy business, trademark licensing, and content monetisation. During that time, we’ve also enjoyed significant geographic expansion, opening offices in Tokyo, Beijing, Dubai and Florida, to add to offices in London and New York.

How has GWR helped with your career development?

Hugely; as well as giving me the opportunity to formally qualify, I’ve also been able to develop skills such as risk and ‘crisis’ management, which in many ways have become far more useful in practice.

What particular projects have you enjoyed working on most?

I’ve really enjoyed a recent project – creating and implementing the company’s Diversity & Inclusion polices. As it is focused on GWR as a (rather unique) service-provider, I’ve been able to draft a very bespoke set of policies from scratch rather than simply rely on an off-the-shelf model, which would have had far less resonance and engagement.

What about the record attempts? Which one sticks in your memory?

As General Counsel here, I’ve been involved in a number of interesting record-breaking attempts, either meeting dignitaries, supporting the GWR adjudicator or, in some cases, taking on the adjudicator role myself.

The records that people attempt are really wide-ranging, and sometimes can be rather hair-raising. They range from mass-participation sporting events to the longest, heaviest, strongest, etc.

Some of the more memorable ones I have been involved in were the largest taekwondo group participation event, which took place in front of the parliament building in Seoul, and the largest choir of over 100,000 people in Hyderabad. I once had to measure the world’s longest pizza in Poland (over a kilometre in length) and flew to Qatar to verify the world’s longest selfie stick (which was a massive eighteen metres).

Some trips have taken an unexpected turn of events. I once undertook a whistle-stop trip to Pakistan to sign a contract, which at first sounds like business as usual for a lawyer. However, instead of taking place in a meeting room, the signing happened on stage in a full-to-capacity football stadium in Lahore, whilst being live-streamed around the nation.

Why are you called in?

It usually tends to be where there is a perceived risk to health and safety of the public or participants, or where there might be sensitive or difficult situations to handle if things went wrong. On other occasions it’s to make sure that the GWR brand is accurately represented.

When I have been adjudicating, it usually involves explaining the record guidelines of the particular record attempt, and then confirming that the rules have been complied with.

What’s the most memorable?

One was an adjudication I performed in Japan for a live TV show where things almost didn’t go according to plan.

The record being attempted was the world’s highest shallow dive. That’s basically a high dive from a platform eleven metres high into a pool of water just 12 inches deep. Clearly there are health and safety risks involved and so I was chosen as the adjudicator in case anything went wrong.

On this occasion, I also ended up having to mediate between the TV producers and the performer (known as “Professor Splash”), to persuade him to go ahead with the attempt after the TV crew unexpectedly hurled a mannequin off the diving board and onto concrete below, just for effect, to show the audience what might happen if it went wrong! Understandably, this was a little upsetting for the ‘professor’, but it all ended happily.

We don’t have that actual clip, but here’s our video of Professor Splash doing his thing on another occasion:

What is the best piece of career advice you’ve been given?

I’ve never experienced that pivotal moment where someone has imparted their career pearls of wisdom. In a funny sort of way, perhaps not having that has allowed me to discover my own thing in my own time.

What pieces of practical advice would you give to someone looking to join the legal profession?

Consider alternatives to a private practice career. It may surprise you that lawyers can be creative too.

Develop your own style, whatever that might be. Remember that your worst experiences can be learning opportunities.

You’ll probably find me in a London second-hand record store trying to locate a mint copy of the first Orange Juice single (with flexi-disc and postcard, naturally). Otherwise, anything music related. I do like a pop quiz, as long as it is skewed towards the pre-2000 era.

I took over my sister’s Sunday ‘paper round when I was about 11 or 12. My employment was abruptly (and understandably) terminated after I failed to notify the newsagent that I’d be absent for a week because of a school trip to France.

If you could spend an hour with anyone else in the entertainment sector, who would it be and what would you ask them?

If I’m permitted to speak to the dead, I’d ask David Bowie about his creative process during the infamous Berlin years, particularly what was it that attracted him to the German Expressionists of the early 20th century. After talking about his art collection, I’d put in a cheeky request for a signature on my 8-track cartridge copy of Low.

If maintaining a strict alphabetisation of a seven thousand-strong vinyl collection can be considered a crime, sentence me now.

What’s the most interesting book you’ve read in the last year?

I only read non-fiction these days, and almost exclusively music and arts-related biographies. I’ll obsessively read any autobiography from a key player in the emergence of punk. Both Debbie Harry’s and Sylvain Sylvain’s recently published recollections of that period are illuminating.

I was fortunate enough to witness American Psycho at the Almeida. Otherwise anything by Pinter on stage or screen.

My least favourite was Morrissey’s attempt at fiction List of the Lost; favourite might be the one I’m reading now, the first part of William Feaver’s The Lives of Lucien Freud.

I’m struggling to name a favourite, but my finest dining experience was Chez Panisse in Berkeley.

Favourite holiday destination so far, and where next?

I loved last year’s trip to South America, but closer to home, recent trips to Baden-Baden, Antwerp and the Hague have also been very memorable. In fact, I’d be content to spend the rest of my days exploring the less-known parts of Europe, particularly in Scandinavia.

What would you do if you won the lottery?

Once I’d travelled the world visiting all the best record stores, I’d settle somewhere in the Cotswolds where I’d divide my time between running a vintage collectables store and an animal rescue sanctuary (cats, dogs and owls being particularly welcome).

Most annoying phrase you’ve heard in the workplace.

I have been known to raise an eyebrow or three when colleagues use the abbreviation GUINNESS to refer to Guinness World Records. I can be very boring when it comes to the proper use of trademarks.