How important is your in-house legal job title, when others are continually evolving? 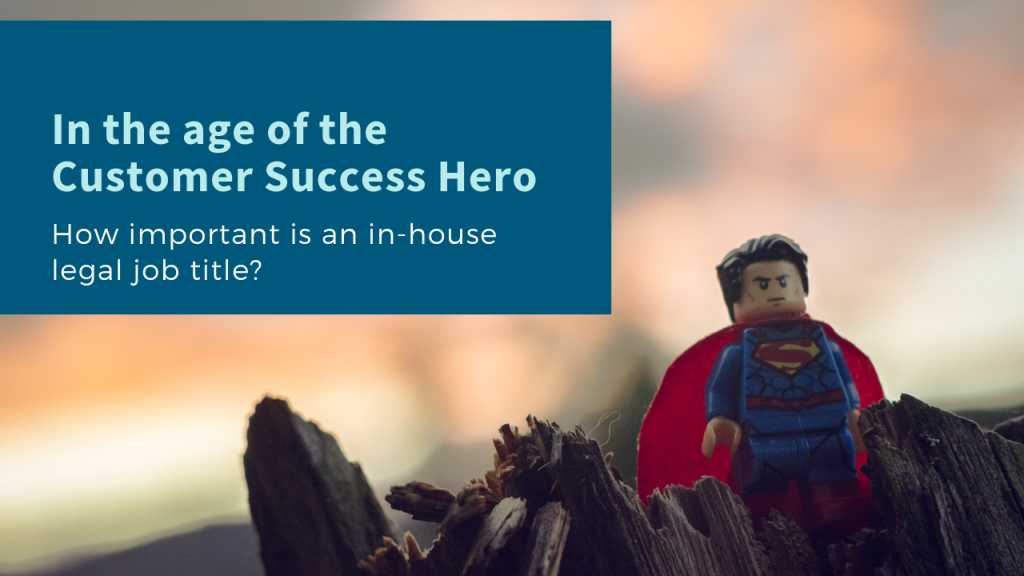 An in-house legal job title ought to be straightforward, but what you choose can sometimes cause bumps in the recruitment road. So how do you decide on the best option when hiring an in-house lawyer? We break things down for talent acquisition managers undertaking a legal recruitment project for the very first time.

This week we had an issue with technology, when trying to get two online SaaS tools to play nicely with one another. This is relevant for no other reason than it led to some support dialogue with ‘Paul’ whose employer had chosen to refer to him as a “Customer Success Hero”!  It’s a rather novel job title which none of us had seen before. So, naturally, some banter ensued around: What is the appropriate dress code for such a role? Would you receive a verbal warning for wearing undergarments over trousers in meetings? And what is the  next step on your career path, “Superhero” perhaps?

Joking aside, it did cause us to reflect on the range of in-house legal job titles we encounter these days, and to identify any patterns or principles which may assist talent acquisition managers undertaking an in-house legal recruitment project for the very first time.

Florit Legal search consultants have undertaken projects with a wide range of businesses looking to hire an in-house lawyer, and the job title ascribed to legal roles varies hugely from company to company.

A quick search of Linkedin uncovers as many as 60 permutations of ‘standard’ in-house legal job title tags alone, before you even dig further into the wider range used in the legal talent pool such as ‘solicitor’, ‘associate’ or ‘attorney’ and those used by the individuals themselves, which can be different again. A talent acquisition manager sifting through legal job applications for the very first time soon uncovers a minefield with hardly any consistency.

Does it really matter what you call your in-house legal role?

Some care is needed at the outset, from various angles. Here’s why:

Legal Job Adverts: You want the right lawyers to not only see your role but be curious enough to apply.

With the shift from print advertising to digital, the sheer volume of legal job advertising these days is huge. As a result, it’s all too easy for your particular role to get lost in the ‘noise’, with a passive advertising strategy. Choosing a generalist title such as In-house Lawyer or In-house Legal Counsel, may be entirely correct but since there are so many of them out there, it may be better to use something more specific, in order to stand out. It depends on the situation. When you consider that fewer than 5% of relevant legal candidates are actively seeking a new job in certain categories, it’s important to get this right, or your advertising spend, and your time, will be wasted.

Some may find it difficult to accept that a candidate would rule themself out of applying for a role based on a job title. However, it can happen inadvertently when the lawyers you want to attract are frequently under pressure and surrounded by information overload. Things can get overlooked. We once undertook a search assignment for a client who had previously failed to fill a new role they had advertised themselves, as “Legal Counsel”, prior to retaining us. Unfortunately, the job title they used in the advert simply hadn’t triggered the desired response in the ideal candidate. We approached the person they eventually hired with the opportunity and they told us they vaguely recalled seeing the role advertised previously but didn’t look into it further as they thought it was a junior role and not the Head of Legal level role they actually desired.

A similar situation can arise when we act for large American, European, or Asia Pacific based multi-nationals looking to hire their first in-house lawyer in the UK. Here, it’s not uncommon for us to be presented with a job title which fits neatly into an already established structure, but which may differ considerably from those of potential candidates who are already “General Counsel” in smaller companies in the UK. The exact title of the role may take several forms, including ‘Regional Counsel’, ‘Senior Legal Counsel’ and ‘Associate General Counsel’ to name just three. On occasions, a candidate’s initial excitement at our description of a role later diminishes when faced with a job title which, on the face of it, feels like a ‘demotion’. Whilst it’s relatively rare for a lawyer to reject a role based on the title alone, a seemingly lesser job title can cause discomfort with some.

The appropriate job titles will depend upon each individual business, it’s size, structure, internal precedents, geographical footprint and the legal salary budget. It’s these many facets that contribute to the varied landscape.  Here’s what you should consider.

What is the structure of the company?

The larger multi-jurisdictional and global businesses will want to stay consistent with their existing structure. There is often little flexibility in some individual corporate structures, but also considerable differences from one company to another.

In-house legal job titles in the UK depend very much on the size of the team.

The average number of lawyers in any in-house legal function in the UK is around 4 (excluding non-fully qualified staff such as paralegals or legal assistants). Clearly the numbers we encounter in larger FTSE or AIM listed businesses are a lot higher than this.

Although the structure of in-house legal teams will vary hugely from sector to sector, in the UK the 3 most common structures are:

Why are you hiring an in-house lawyer and what responsibilities are included in their role?

What is your legal salary budget?

An existing legal grading structure will clearly give some guidance on salary and job title. Where the person you are hiring will be joining an existing team of in-house lawyers, salary and job title precedents are very likely to have been market tested already. If you are looking for a Legal Counsel to work alongside a Senior Legal Counsel and report into the latter or a Head of Legal, then salary parameters will be carefully pegged to these other two positions.

Similarly, where you are creating a new in-house legal function and hiring your first lawyer, your existing grading structures for other roles, although helpful, may result in a salary which is too low to justify the title Head of Legal or General Counsel and you may attract the wrong candidates. If you set the salary too low (for example, to achieve parity with a financial controller when the legal role also reports to the CFO), you may only have enough in the budget to cover the salary of someone with say up to 3 years PQE, which perhaps militates against adopting those titles.

Ultimately, the importance of an in-house legal job title only goes so far. It  presents us with a framework to work within – a convenient ‘shorthand’ description of a role’s extent and seniority. With such variety at our disposal we can’t see the range of titles continuing to expand, unless organisations feel there’s a particularly good reason to create new legal sector equivalents to the customer success ‘Hero’ or ‘Superhero’. However, if new titles emerge, we always need to remember that a job title never tells us the whole story. Further guidance on what different in-house legal roles look like can be found here.