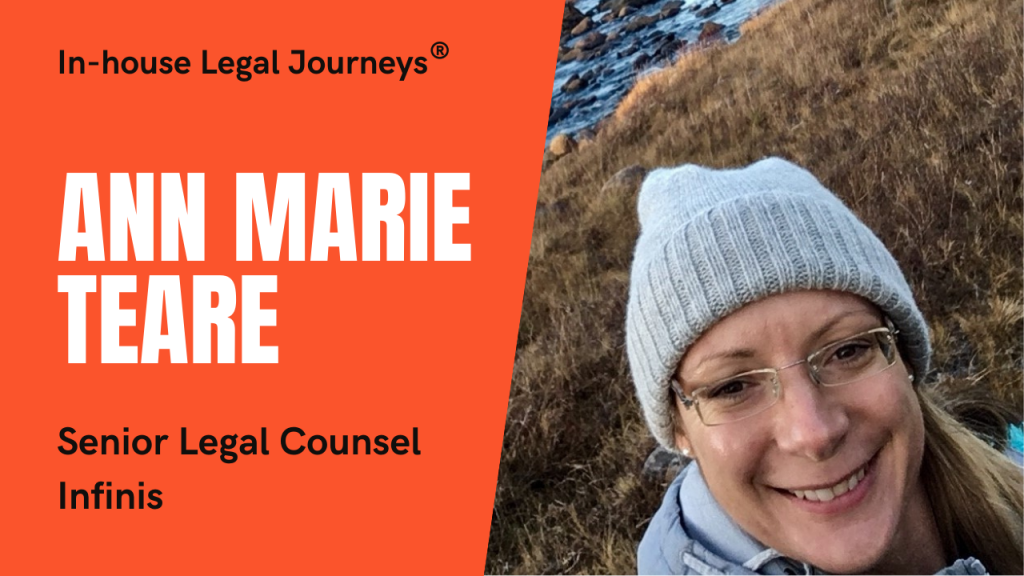 Miguel talks to Ann Marie Teare of the in-house legal team at Infinis in Northampton, on how her work as a planning and environmental lawyer with Norton Rose first led to her becoming a general commercial legal counsel, how Infinis continues to provide challenge and variety, and how the environment looms large for her outside work too.

Ann Marie is quite unusual among in-house legal counsel. With a City training with Norton Rose (as the firm was then known), Ann Marie was a planning and environmental lawyer before she moved in-house – a class of legal professional not commonly sought by industry for commercial legal roles. However, having undertaken an in-house legal secondment with an energy sector client, this presented the ideal platform on which to build. Ann Marie explains…

Our interview with Ann Marie is the latest in Florit Legal’s In-house Legal Journeys® series. It is an updated version of a blog article originally published in 2018.

How did you become a lawyer?

In all honesty I didn’t specifically intend to be a lawyer until I actually started to go to training contract interviews. I did a law degree because I wanted to study a new subject to the academic subjects that I studied at school. I thought law would be well respected and would keep my options open. When I finished university, I still didn’t have a definite goal but I applied for training contracts as a natural progression. It was only when I started to go to training contract interviews I realised – particularly at Norton Rose, the firm I ended up at – that the people I met and who interviewed me were actually quite a lot like me in terms of their skills and general approach to life, albeit that I had an awful lot to learn. I really enjoyed solving the practical problems put in front of me so that’s when I realised perhaps it wasn’t quite such an accident that I had ended up there after all.

Why did you choose to work at Infinis?

I was working in private practice for a few clients in the energy industry but I was conscious that, as a planning and environmental lawyer, I was only seeing a small part of a much bigger picture. I wanted to learn more about the broader commercial implications of my advice and to see projects through from start to finish. I also wanted to learn more about the energy sector so a move in-house was the ideal solution.

I was attracted to Infinis specifically for a lot of reasons. The company was quite young when I joined and had just started to develop its own wind farm portfolio so it was an exciting time to get involved. It seemed very forward thinking in terms of where the company was heading and it has proved to be an incredibly dynamic and adaptable business. The culture also appealed to me. The staff I spoke to had a real sense of pride in the organisation and their role within it. It came across as a friendly and professional company and it’s staff clearly aimed for excellence. The biggest driver for me is to be proud of what I do and what I am part of, so that was very important.

What particularly positive things keep you engaged there?

The people I work with, and the culture.  It is still the company I joined, even though it has grown a lot.

How has the organisation changed since you joined?

Infinis has been in a constant state of evolution since I joined in 2010, it has grown and expanded into new energy sectors but has also adapted to changes within the energy industry itself. It has made for an exciting and challenging eight years.

Originally Infinis generated electricity from landfill gas and when I joined it had just acquired an on shore wind and hydro business. We built up the wind portfolio through development and further acquisitions. The group was reorganised in 2016 and what is now Infinis’ core landfill gas business, was acquired by our current owners, 3i Infrastructure plc who are long term investors in infrastructure assets and businesses.

Since then we have embarked on another growth agenda with the LFG business as a base. Earlier this year we acquired Alkane Energy and now have three divisions: the original renewable Landfill Gas (LFG) division; a baseload Coal Mine Methane (CMM) business; and a Power Response (PR) business.

From a day to day perspective, the type of work that the in-house legal team deal with has always been varied but given this evolution the scope of experience we get has expanded significantly. We are now at the point where we are looking to expand the legal team by hiring additional lawyers with from a range of commercial legal disciplines, since we have a real breadth of legal work to offer.

What is perhaps most commendable is that, through this expansion, the underlying culture and positive dynamic of the business has stayed the same.

How has the organisation helped you to develop?

I wasn’t a commercial lawyer when Infinis recruited me – I was a planning and environmental lawyer, so Infinis helped me by giving me a chance to do something different. They had faith that I could learn what I needed to know and my colleagues have answered a lot of technical questions from me over the last eight  years. (My particular favourite was the Introduction to Electrical Engineering textbook that one of our project managers leant to me after he had explained a particular technical aspect of a connection agreement to me for the umpteenth time!)

What particular projects have you enjoyed working on most?

I really enjoy working on our development projects because you can see the physical result – a new operational generating station. Being an in-house lawyer means I see all aspects of the project and the contracts required to deliver it – civils, communications, fuel supply and property – it’s quite a long list.

When the project is commissioned and handed over to our Operations Team there is a real sense of achievement in the office –it’s a real team effort. The in-house legal team are still involved of course after the project is operating, as we support the teams involved in operating the project too.

Who’s been the most influential to you in your career?

I think it has to be my first supervisor when I was a trainee. She had high expectations and was pretty strict but incredibly fair. I don’t think I realised it at the time but she was setting me up to do well – I have a lot to thank her for.

What piece of practical advice would you give to someone looking to join the legal profession?

Anything outdoors – usually something involving horses. And I play in our village ukulele band.

I was a waitress at a local hotel over the summer holidays. I wasn’t very good at it and was mainly responsible for making sure the ducks didn’t come into the restaurant from the lake! I did get better though and worked as a waitress a lot through school and university.

An evening on the sofa watching the Gilmore Girls. I have slightly ruined my husband’s Netflix recommendations as a result!

What’s the most interesting/enjoyable book you’ve read in the last year.

Born to Run by Christopher McDougall – it’s a great story but also full of some quite handy training and nutrition tips. It’s a good reminder too that sometimes it pays off to do something because you love it and not just to achieve an end.

Do you have a hidden talent?

I am sure I do, I just haven’t worked out what it is yet. I could give you a list of what it isn’t, if that helps.

Favourite holiday destination so far, and where next?

Montana – I was staying on a ranch riding out every day. The air was so clean – its a cliché but the sky really is huge – its awe inspiring!

Next destination is Croatia I think for some R&R, sunshine and sea.

Getting stuck in the stairwell on vacation placement. I’m not going to tell you which firm. Ever since then I have been slightly obsessive about having my security pass attached to me at all times.

Besides being a lawyer, if money were no object and you knew you couldn’t fail, what would you most like to try or do?

I would live in a wood and manage it sustainably – I would make furniture and decorations from the felled trees. My Dad taught me basic carpentry so with a bit of practice I think I could make some interesting bits and bobs. I’m not sure I would actually make any money but theoretically I wouldn’t need any.